I'm REBEKA, 25years old- SEXY And HOT girl originally from Brazil and with India roots in town for you a short time

Welcome to my profile and thank you for stopping to take time to get to know me,

We entered Uruguay from Brazil into Salto. We stopped in town for lunch and a supermarket shop. It was incredibly cheap. A bottle of decent wine was only 70p and a tasty restaurant lunch, with wine, was less than two quid. Our first night, we stayed at a campsite just outside of the town, close to several thermal spas and a water park. A group of us decided to treat ourselves to a day at one of the health and beauty spas. I had an all over body conditioning treatment.

First, the beautician applied a body scrub, then a white clay-like substance, which was left to dry. I spent the afternoon relaxing in the different thermal pools and spa baths — much needed after three weeks in a truck. The next day we were up at dawn to break camp and head for Montevideo, the capital of Uruguay. The scenery along the way reminded me of New Zealand the Kiwis with us agreed — very flat, green fields dotted with cows and trees.

Roads were very long and straight if a bit bumpy with hardly any traffic. Houses were low, single storey box-shaped; some painted in pastel colours with well-kept classic cars parked outside. I saw several horse-drawn carts. Uruguay has poverty, but not on the scale seen in Peru and Bolivia. Montevideo is a pleasant, clean, compact city. We stayed at a hotel in the city centre, and set out to explore. In the evening, we all met up at a restaurant at the meat market — Mecardo del Puerto.

Inside were several open Barbeque meat grills where you sat up at the counter, pointed at which slab of meat you wanted and they would cook it to your preference. The steaks were the size of encyclopedias, falling off the plates — not really the best place to be a vegetarian. Eventually I settled on a omeletta con patatas thinking I would get an omelet with potato and other vegetables, maybe even a side salad. 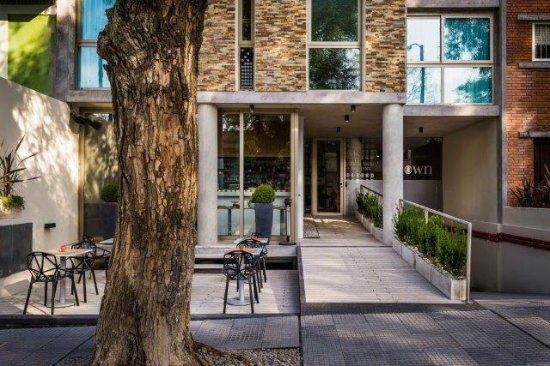 But no, I was presented with an omelet that had chips inside it! Not wanting to miss a Uruguayan celebrity, we hung around rubbernecking. Then who should come out of the building but none other than Prince Phillip of Spain! Apparently, he was in town on an official visit as the President of Uruguay was changing the next day.